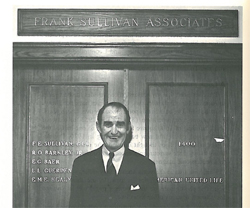 Since we’re all in SALES (and we need to get over it), I’m going to share with you a SALES NUGGET every day this week.

These five nuggets come from Frank Sullivan, who was my first mentor and perhaps the best life insurance salesman in the world. A Trustee at Notre Dame and a very good friend, Frank wrote a book in 1970 called THE CRITICAL PATH TO SALES SUCCESS. I’m going to share some wonderful nuggets and gems from Frank’s book and his life.

Re: Frank, “It’s easier to sell a $1 Million life insurance policy to a QUALIFIED PROSPECT than it is to sell a $10,000 policy to a relative with no money.”
– Frank Sullivan

One of the things I learned from Frank Sullivan very, very, very early in my development career was that it’s just as easy to sell $1 MILLION life insurance policy to a QUALIFIED PROSPECT… than it is to sell a $10,000 policy to a relative (with no money!)

That didn’t seem like much at the time. Over the years, it’s been HUGE!

There were a number of great tips and ideas Frank gave around this “lesson”:

Some years later, while still at Notre Dame, a good friend and one of the most persevering (read “stubborn in a good way”) people I’ve ever had the pleasure of working with was Tom Pilot. Tom took Frank’s “Million Dollar” philosophy to its highest level.

He simply ASKED (almost) EVERYONE for $1 MILLION. It’s amazing how many people said yes!!!