From the archives – This is a piece our founder, Tom Suddes, wrote in 2010. I’ve found myself using the EAP framework a lot these past few weeks. Thought it would be a great time to share with our readership.

Here’s a very simple way to get stuff done: Make EVERYTHING A PROJECT!

This simple concept, guiding principle if you will, is for anybody who is trying to achieve a goal, make a quantum leap or change the world.

This idea has been developed over the last 10 or 15 years within our company and with our clients. It drives everything we do.

Here are the 8 steps of every PROJECT:

Through the first half of the twentieth century, experts thought it was impossible for a human to run a mile in under four minutes. Then, on a rainy day, in 1954, a skinny medical student from Oxford named Roger Bannister became the first person to run a sub-four-minute-mile. He electrified the world when he ran 5,280 feet in 3:59.4.

Sir Roger Bannister passed away this weekend at the age of 88.

Bannister showed others what was possible. In the decade that followed Bannister's run, five more runners achieved a 4 minute mile. And in the next decade… now knowing that the human body was capable of a four-minute mile.. 300 hundred runners would go on to break this time barrier.

This first-of-a-kind achievement, followed by many others that replicated became known as The Roger Bannister Effect.

“If you want to understand the Bannister effect,” says high-performance psychologist Michael Gervais, “you have to understand that the brain tells stories. When most hear about an impossible feat— the sub-four-minute mile— our first reaction is: ‘Not real, no way, not possible.’ But we have a strong need to make meaning out of experience and this new reality forces us to change our story. We move to, ‘That’s crazy, far out, unreal.’ Pretty soon, we accept this new reality and shift our paradigm further and this engages imagination. We start imagining the impossible as possible. What does impossible feel like, sound like, look like. And then we start to be able to see ourselves doing the impossible— that’s the secret…”

(Excerpt from The Rise of Superman: Decoding the Science of Ultimate Human Performance by Steven Kotler)

Think about The Bannister Effect in the world of social innovation, philanthropy, and impact! What limiting stories do we tell ourselves? What is possible if we ignore those stories? What if we are the FIRST to show others what’s possible? 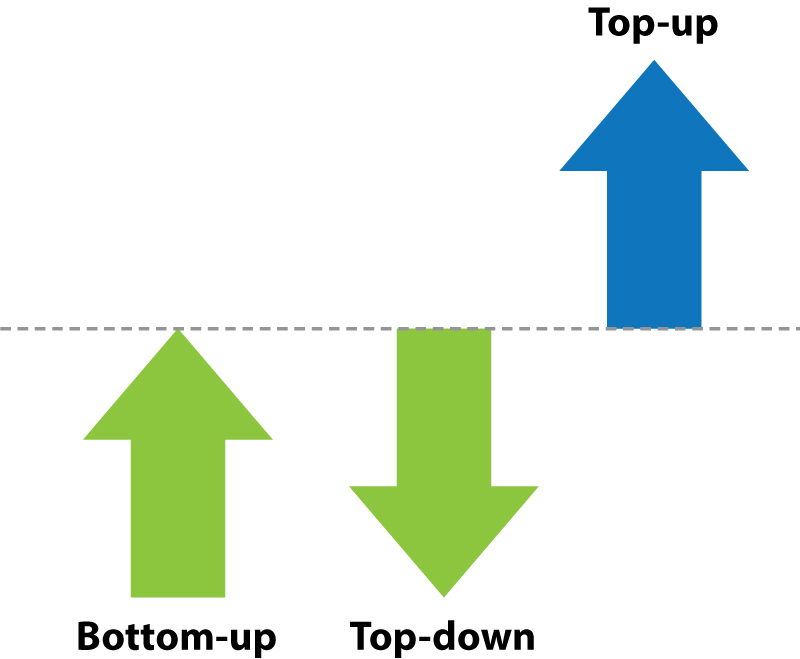 But here’s a different way to think about strategy with foundations, specifically –  What if you sold TOP-UP?

Top-down selling focuses on the CEO, or leadership. Getting them on board with your cause or case. Bottom-up would focus on the rest of the foundation/organization. By way of example, this might mean analysts, or program directors.


Foundations are constantly reinventing strategy. I joke that airports and foundations are two things in a perpetual state of renovation. There are lots of reasons for this (and I’ll save them for another post.) For now, just know that it’s a tough job to run a foundation…

The definition of impact is ever changing….

As are focus areas….

And further, how we (society) measure impact is not always clear. So, not only are the goals shifting, but often it’s not clear what the goal even is…

Let’s empathize with this challenge for a moment. It’s very often the case that YOU (the organization, the thought leader, the lifelong-devotee-to-this-challenge) know MORE about the problem than the head of the foundation that just decided to tackle this problem as of 2016…

This is where we (again) invoke the For Impact Point of View: Impact drives Income.

Instead of trying to think about how to get grants, think instead about trying to offer your expertise… assistance… perspective to help the foundation to clarify strategy and have impact. This changes the approach. It may or may not result in funds to your cause, but it should result in more impact for society AND a much stronger relationship when it comes to funding.

Story from the field:

Several years ago we were working with a Senior Center. The organizational leadership had a combined 74 years of experience working in the sector and the Executive Director was a published author on the subject of ‘Aging in Place’.

A new foundation had just been established to fund ‘aging in place,’ and the benefactors had hired their own Executive Director to create a strategy and run the foundation.

The Senior Center applied for a grant and had been rejected.

So, here was our coaching to the Senior Center, “Go back and meet with the Executive Director. Ask her about her strategy. Don’t focus on your own funding. Genuinely offer yourself as a willing partner with YEARS of experience in this area to help.”

The Suddes Group / For Impact invests profits back into the social sector with a focus on to developing talent and leadership for the (social) impact. We’re really proud of Unreasonable Institute, which has been a great partner through which to focus this investment. In addition to supporting the Unreasonable Institute through strategy and fundraising, we provide a curriculum, coaching and training for entrepreneurs that go through the Institute programs (now in 30+ countries)!

We’re beaming with pride yet again as Teju, Banks, and the entire Unreasonable Team have made a strategic leap to have more impact. Through this leap, they’ve also rebranded. The Unreasonable Institute is now UNCHARTED: Charting the Course from Impossible to Possible.

Here is a little from the Uncharted team about their evolving course and story.

There is no single way to solve the problems our globe faces. This learning marked the beginning of an arduous, important journey to not only a new look, but also a redesigned approach for how to solve the world’s greatest problems.

Uncharted represents that our world, and how we improve it, is not fixed. There is no single way to solve the problems our globe faces, so we must head into the uncharted and learn what it takes to put big dents in big challenges our world encounters.

Problems are complex and dynamic. Our approach to solving is multi-colored, multi-changing, and multi-shaped. Uncharted will adapt and become best suited to solve.

In an interview, think: throwing darts

This is a simple concept I’ve used a lot the coaching of others.

I often watch people in an interview, or a sales call, ramble on in response to a question. In many cases, it’s as though they’re doing the thinking WHILE they’re talking.. and the model I have in my head is that of exploding fireworks. They start talking about one thing, the FIND a point and then explode into a new direction around that point… and then another direction… and so on.

Think instead about the mental image of throwing a dart to answer the question.

Stop. Think about what point you want to make. Throw the dart. Then stop talking.

“It is not the strongest of the species that survive, nor the most intelligent, but the one most responsive to change.” – Charles Darwin

The same is true of organizations. I read somewhere that the common element of the longest surviving companies in the world was not business model, sector, or size… it that they were great learning organizations.

“Nothing endures but change.” – Heraclitus

The role of leadership is not to prevent the system from falling apart. On the contrary, its role is to lead change that causes the system to fall apart and then to reintegrate into a new whole.” – Ichak Adizes

“Without an action plan the executive becomes a prisoner of events.” – Peter Drucker

This is from a timeless Drucker article that appeared in HBR 2004, “What Makes an Effective Executive”.

“What made [leaders] effective is that they followed the same eight practices:

Kerry and I are spending time this week at the AFP’s International Fundraising Conference in San Francisco. If you’re here, come find us! We delivered a session this am: BE FOR IMPACT! It was great to share the point of view, napkins, some stories about Walt Disney and more!

Here are the slides! 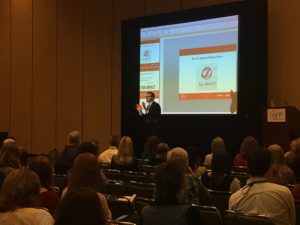 I picked this nugget up while reading Deep Work, by Cal Newport.

The Zeigarnik Effect describes the effect of incomplete tasks to dominate our attention.

Some tasks require deep focus of the conscious mind – like writing and math. Other things are more complex and can be better solved by the subconscious mind.

Newport suggests we are prone to leave action items open, or incomplete. They then dominate our attention. I know I’ve experienced this — processing the same to-do over-and-over. This is the Zeigarnik Effect.

Newport describes how he shuts down work each evening. He closes up action items and writes up the plan for the next day. This helps to turn off the conscious mind.

Incomplete tasks both dominate our attention AND (therefor) rob you of the ability to switch modes; they wear down your conscious processing mind AND they prevent you from using your supercomputer — the subconscious mind. So, beware the Zeigarnik Effect!