Engagement Has a 12-Hour Half-Life

I’m constantly trying to get people to think about what it means TO ENGAGE! I think we’re taught how to present, but we’re not always taught how to engage.

I define engagement as a dynamic within a relationship that holds attention, heightens interest and motivates action.

Think about a movie or a performance you’ve attended where you were engaged and left with that feeling of being present and excited. Think about how that engagement consumed your mind! Now think about how you felt the next day.

I believe engagement has a 12-hour half-life. That is, if we could measure engagement in some way, it seems to dissipate by half every 12 hours.

This means that within 24 hours of your visit the prospect has an engagement level at 25% of what it was after your visit.

THINK ABOUT THE IMPLICATIONS!

As salespeople, we need to be making engaging presentations and asks. And, more importantly, we need to pounce on timely follow-up. It’s better to follow-up immediately, even if it’s 60% of your best effort, than it is to wait three days. At three or more days you’re just working to recapture engagement.

(Read more on the 24-Hour Follow Up Rule here.)

Artifacts of Your Funding Conversation

The definition of an artifact is any object made – or altered! – by human beings, where the alteration gives it new meaning or purpose.

Followers of this blog and our publishing will be familiar with the concept of an engagement tool. We advocate for having a simple message and simple tool (1-2 pages, ideally).

More than that, it should feature a lot of white space so you can WRITE and DRAW on the tool with a prospect!

Think about the last time you were in a meeting and someone started drawing as a means of communication. One of you probably tried to keep the indecipherable scrawls (because they captured the experience of the idea sharing).

When you are finished, the marked-up engagement tool becomes an ARTIFACT of the conversation. Your drawing… your scribbling… gives the tool new meaning.

(It’s a hallmark of a good visit when a prospect asks, “Can I keep this?”) 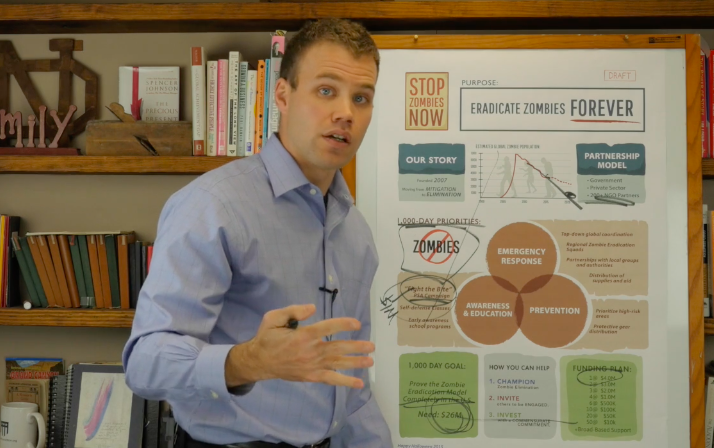 (see this example video @ 7:00 mins for an illustration)

The Most Important Story is the Story You Tell Yourself

The most important story in the world is the story you tell yourself!

Before a visit or an ask, take time to shape that story!

Engage and Then Plan

When speaking of Intel’s strategy, he often said, “We had to engage and then plan.” And, “Understanding comes from action.”

At For Impact | The Suddes Group we harness the power of these words when it comes to visiting with prospects. You can only do so much planning… so much research. On the whole, the ‘social sector’ is paralyzed by prospect planning. Sometimes we need to ENGAGE AND THEN PLAN.

We spend a lot of time studying, practicing, and teaching the art and science of human engagement. It’s essential to communicating, selling, and leading.

We define engagement as: a dynamic which holds attention, heightens interest, and motivates action.

A person’s attention span starts to dissipate after ten minutes — unless you do something to change the form of engagement.

But what about when you’re leading a meeting? Or giving a speech? All you need to do is shift the form of (brain) engagement every ten minutes.

If you’re sharing a lot of information, stop and tell a brief story to weave it all together. This activates the emotive part of the brain. Or, stop and give your audience a chance to process information with a partner. There are many ways to reset attention spans every ten minutes. When you do this, the engagement holds, learning increases, and people take more action.

Crowdfunding is the new Yellow Bracelet

Every few years there is a new fad in fundraising. For the past 2+ years (at least), it’s been crowdfunding (think: Kickstarter campaigns).

I am asked about these at least once per week and here’s my reply: “Crowdfunding is the new yellow bracelet.”

When Livestrong sold the yellow bracelets, it became fashionable for every cause to have a rubber bracelet.

I believe social media is a big medium for communications. It should factor into how we build relationships — but it’s a tool, not a funding solution.

Though the specific advice varies for each organization, here is what I shared with one team last week:

“If you’re trying to build a movement and you want to incorporate crowdfunding, go for it… but you would be justifying it (to me) by bolting the funding onto something with a different end (goal). If you’re trying to add crowdfunding as a core part of your funding strategy then it’s my belief — based on seeing actual numbers at organizations — that you’re going to spend 80 cents to raise a dollar AND it won’t be a sustainable source of funding. On top of that, you have an opportunity cost; you’re putting resources into crowdfunding when you need to be putting more into 1:1 sales first.”

A Different Way to Think about ‘Just Ask’

This is a core tenet of the For Impact message.

If you don’t ask, you don’t get.
People can’t GUESS what you need.

When we share this message people tend to process it in one of two ways:

Most of a room will see it for clarity and simplicity.

A second part of the room will see it as slightly aggressive.

For the second group, I would offer this reframe. Don’t think about this as ‘asking aggressively,’ think about engaging your prospect around your impact in such a compelling way that she asks, “How can I help?”

This CAN happen on a first visit.

(Or, at a minimum, you should aim to make it happen by a second visit. Read: People Cultivate Because They Can’t Communicate)

And if you’re asked that question, you need to have a clear answer! That answer needs to be more than a superficial next move. It needs to address exactly what it will take to make the impact happen (in terms of resources, connections, or funding).

Humans seek order. In a very primitive sense, we’ve evolved to recognize faces (the ‘whole’) over features (the ‘parts’). In a cognitive sense, we learn new things by associating them with existing concepts in our brain… so all communication and learning is a mapping exercise inside our brains.

This is gestalt in action: Gestalt explains that feeling of WORKING to understand the other person. You were working to create order in YOUR mind.

Let’s contrast this with the presenter’s perspective. Everything is in perfect order for the speaker! She is explaining the concept as it makes sense in her head.

Great sales and effective 1:1 communication begins with the ‘order’ (or mental skeleton) as it ALREADY exists in the prospect’s head!

Instead of presenting your ‘frame,’ or concept, start by asking questions. Then, build your presentation on the prospect’s EXISTING mental skeleton. This has several effects:

In our boot camps, we do an exercise to illustrate gestalt and these learning points. We ask attendees to find a partner and — in two minutes’ time — communicate ONLY what is needed for the prospect to understand the organization in such a way that it could be communicated to someone else.

Most people are pressured by the ‘two-minute’ constraint. They start puking information. You can watch the room and see the prospects’ eyes glaze over. Prospects are overwhelmed with the information coming at them.

We then ask each partner to start over. In the second instance, we instruct the sales person to start the two minutes with an open-ended question… and then to follow-up with at least five more questions during the two minutes.

The exercise is used to show that you can actually communicate MORE by asking questions, and then responding…. by building your message on top of the prospect’s EXISTING mental skeleton.

Here is the example I use to illustrate this point. I communicate what it is that we do at The Suddes Group/For Impact.

(You have an advantage in READING these words. Imagine LISTENING to them.)

Scenario 1: The Suddes Group provides fundraising help. Unlike a lot of consultants, we also focus on organizational development and team development. We focus on the storytelling, the team, AND the funding implementation. We’ll do whatever it takes to help you move the ideas into funding. Often, this means we go on visits WITH you. We have a sales process, a funding road map, and a relationship-based funding model….

Twenty seconds into my ‘spiel’, I’ve lost the room.

Scenario 2: (I pick ONE person — Lisa — and engage in a dialogue.)
Me: Lisa, what is your greatest funding challenge?
Lisa: Trying to figure out what to say to get people to give the money.
Me: Is it that you don’t know HOW to ask? Or that you don’t have a succinct message for the organization?
Lisa: I think we’re pretty succinct in our message. In fact, we’re GREAT storytellers. And, I think we have prospects, we just don’t seem to be able to convert any of them to big gifts.
Me: Do you feel like you have a reliable process to follow?
Lisa: Actually… no… maybe that’s it. Now that you ask the question, there are practices we probably don’t know about to make the ask easier. And then I would say we lack the confidence to ask.
Me (communicating WHAT we do in response form). Lisa, this is what we do. We help teams with those two obstacles. We help them figure out what to say, and how to ask, AND we help them build a process so that they can do this again and again.


The goal of the exercise is to communicate what you do in a way that the other person could communicate with others. In the first scenario, I was forcing the prospect to mentally categorize all sorts of new concepts – most of which weren’t interesting or relevant to the prospect. In the second scenario, we were successful by building questions and then building relevant associations for the prospect.

In 1:1 engagements, you can COMMUNICATE more effectively by asking questions, and then by RESPONDING with relevant concepts.

I’ve been spending a lot of time ‘in-the-field’ the past few weeks coaching some remarkable social entrepreneurs from Mulago, StartingBloc, and (nonprofit graduates of) TechStars.

Here are simple reminders we come back to with almost every social entrepreneur.

We’re big on vocab. Team vocabulary is especially important. [Think: CLEAR COMMUNICATION.] Here is some vocabulary for SALES TEAMS. In our roles as coaches, we see a correlation between the adoption of these phrases and the emergence of a true sales culture.