I’m continuing to write about some mindful habits and insights to frame thinking and actions for the New Year.

Today’s post pulls together some thoughts on FOCUS and PRODUCTIVITY.

Manage your energy, not your time!

There are two types of schedule, which I’ll call the manager’s schedule and the maker’s schedule. The manager’s schedule is for bosses. It’s embodied in the traditional appointment book, with each day cut into one hour intervals. You can block off several hours for a single task if you need to, but by default you change what you’re doing every hour.

When you use time that way, it’s merely a practical problem to meet with someone. Find an open slot in your schedule, book them, and you’re done.

Most powerful people are on the manager’s schedule. It’s the schedule of command. But there’s another way of using time that’s common among people who make things, like programmers and writers. They generally prefer to use time in units of half a day at least. You can’t write or program well in units of an hour. That’s barely enough time to get started.

Read the full essay at http://paulgraham.com.

I partition most days into two parts. The first is the MAKER part of my day: writing, creative thinking, strategy. I will work from my home office… or my corner coffee shop… NOT AT THE OFFICE. Early mornings 5-10am are when I’m most creative (with an interlude to get the kids up, dressed, fed and to school). I then arrive to the office around 10 and schedule calls / meetings AFTER 10:30.* This let’s me FOCUS my creativity when my energy is highest around a MAKER schedule.

If you are a leader you need time to THINK. Manage your energy, not your time. When do you do your best thinking? PROTECT YOUR MAKER TIME. The science is clear and conclusive – we incur a heavy transaction cost associated with the interruptions that stop/start our ‘deep work’. 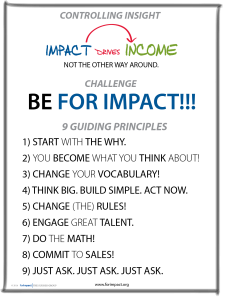 We feel that these 9 Guiding Principles are pretty self-explanatory, but here are some notes to help you take charge of your Development Operation. ( Download and print the poster here.)

Here’s Tom with the companion video to Change Your Vocabulary.

“Change is the end result of all true learning.”
– Leo Buscaglia

If you’ve ever been to a For Impact training of any kind, you’ve experienced the infamous “Rope Trick.” We pair participants up and “handcuff” them together with ropes. The goal is to solve this problem at least once – to completely free yourself from your partner without your rope ever leaving your wrists at any time. You can imagine the hilarity that ensues, but there is a point! Many people repeat the same funky dance moves over and over yet end up back in the same spot – Still handcuffed together.

“Insanity: doing the same thing over and over again and expecting different results.”
– Albert Einstein

Solving this problem requires that you change your perspective.

“A change in perspective is worth 80 I.Q. points.”

Being For Impact is all about a change in perspective. Change can be scary, so in our approach we always GIVE you something valuable/simple in exCHANGE for the ‘old way’ of thinking. And if old Alan is right, these changes will also increase your I.Q. 🙂

Think about some of the ‘insane’ behaviors you/your organization are still doing – Special Events, Feasibility Studies, Cultivation, Transactions, etc – And, if you haven’t already, I recommend that you read or share the For Impact Guidebook: Change (The) Rules!

(P.S. If you want the solution to the Rope Trick – Email me and I’ll send you video solution.)

From the archives, three great nuggets from Tom about facing your/your organization’s reality in order to move forward.

Let Go of Your Baggage.

We’re re-publishing some lessons from Tom’s For Impact Campaign Manifesto: Take a Quantum Leap this week and next.

One that comes up often in coaching and working with clients is getting over the ‘We’ve always done it this way’ attitude and instead asking questions like, “Is this (event, appeal letter, feasibility study, etc) producing the right results? Or any results for that matter?”

You can’t make a QUANTUM LEAP dragging ‘BAGGAGE,’ ‘SACRED COWS,’ and an ‘ALWAYS DONE IT THIS WAY’ attitude.

“IL SOLE NO MUOVE.” Da Vinci and Copernicus both got blasted (by the church) for espousing this heresy: ”THE SUN DOESN’T MOVE.”

“The world is flat.”
“The 4 minute mile can’t be broken.”
“Peers must ask peers (for money).”
“Feasibility studies are mandatory.”
“We need this event to raise awareness/friends.”

[Note: we do take a hard line on many things we consider to be OLD THINKING. The good news is that if we take something away, we’ll always give you a NEW way to think about it.] “We need a NEW LANGUAGE. The critical distinction is not between business and social, but between GREAT and GOOD. (We need to) jointly embrace a LANGUAGE OF GREATNESS.”

And, I say, CHANGE YOUR VOCABULARY!

I believe that if you CHANGE the way you TALK…

you can CHANGE the way you ACT!

It’s not just a personal belief: there is compelling science around the psychology of CHANGE that includes tremendous work on this whole idea of NEUROLINGUISTICS and how we FRAME things. Pioneering researchers on cognitive science and linguistics have pointed to the paramount importance of something called ‘FRAMING’.

George Lakoff, Professor at University of California Berkeley, defines ‘FRAMES’ as the mental structures that shape the way we see the world. He says that ‘FRAMES’ are part of our “cognitive unconscious;” but the way that we know our current frames or new frames springs from LANGUAGE.

My hope is that the following OLD WORDS/NEW WORDS will help you ‘TALK THE WALK’… to make it easier to ‘WALK THE TALK!’