Most of us hope to leave a legacy – for our families, communities, those we serve, our world… And many of you reading this have an even more unique opportunity to leave a mark.

As a development professional (in many cases, this includes executive/volunteer leadership), you have the chance to be a part of three legacies:

This is an excerpt from the forthcoming For Impact Guidebook about Leadership Circles.

Every organization should have some form of Leadership Circle. In its simplest form, this is ONE baseline-major-gift level of support, positioned as the cornerstone of your annual fund.   The Leadership Circle is not just another giving level – It’s a funding program and a strategic pillar of your funding model that qualifies prospects, simplifies stewardship, provides flexible funding and annuity!

You’ve heard of Occam’s Razor; this is ‘Occam’s Ask’. It’s set at ONE level between $1K and $10K – messaged around your mission and vision in a way that represents your simplest and strongest sell.

HOW TO MESSAGE: (Examples)

In working with over 1,000 organizations, I can’t think of a time when an organization didn’t benefit from a Leadership Circle. As a tool, its versatility rivals duct tape.

A FEW WAYS TO USE THE LEADERSHIP CIRCLE: 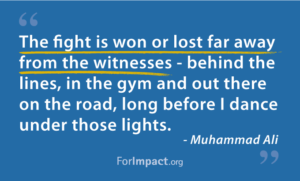