No More Special Events: A Look At The WHY

Tom has stood on podiums (literally) for 30 years and shouted NO MORE SPECIAL EVENTS!

This works as a napkin message – It’s powerful and simple.

I don’t do the ‘standing-on-a-podium’ thing, but I’m not above shouting IN ALL CAPS to make a point:

I get the occasional challenge, “But Nick, events are how we build relationships!”  Or, “Our event gets the word out!”

In years and years of doing this, no one has ever said, “Our event is our CASH COW!”

WHY are you doing the event?  Is it to raise money? Or, is it for MARKETING? (Start with WHY.)

It is the job of marketing to provide qualified leads for sales.

I hear many people who want to defend events with a marketing rationale. If you want to run events as a part of your MARKETING STRATEGY – great! Just don’t PRETEND your events are great fundraisers. And if MARKETING is the end goal, then how much are you telling your story at that golf outing?

Also, if you’re going to do an event to ‘BUILD relationships’ then it begs the question – what is your strategy to MAXIMIZE relationships?

NB: We’ve been on this rant for a few decades now. There are events that raise money – a lot of (net, net, net) money. Here are some examples:

This week’s theme is: COMMIT TO BETTER PREDISPOSITION. 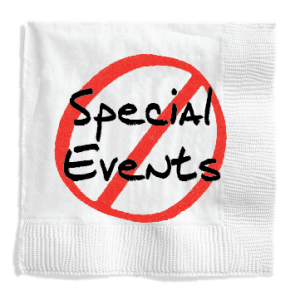 You’ve seen our rant on “No More Special Events.”  If not, I’ll summarize here: SPECIAL EVENTS ARE NOT ‘SPECIAL!’

They rarely generate income anywhere close to the corresponding staff and volunteer effort and time – Even though we’ve spent more that half the year selling tables, sponsoring golf holes or lining up silent auction items.

P.S. Not only do your volunteers and staff hate these Non-Special Events, so do all of the ‘INVITEES’ … who clearly don’t want to go to another ‘un-memorable, time-away-from their-family’ auction, gala, ‘fundraiser’!!!

Instead, MAKE EVERYTHING YOU DO A MEMORABLE EXPERIENCE!

A ‘MEMORABLE EXPERIENCE’ is about your Vision, your Message, your Impact.

Every ‘MEMORABLE EXPERIENCE’ is an incredible PREDISPOSITION OPPORTUNITY.

Nix the Cultivation Event and GO AT THE GOAL

We often see ‘Fundraising Plans’ that call for X number of Cultivation Events a year.

The coaching on this one is always the same: Nix the Cultivation Event and GO AT THE GOAL.

(See ‘No More Events’ and ‘No More Cultivation’.)

Nixing the event and focusing on getting more visits is a simpler, more productive approach. It may feel challenging to work through the ‘but-what-about-objections.’ So, here’s a few ideas:

This shift in thinking save hundreds of hours, thousands and thousands in fundraising costs and countless lives (because we will generate much more INCOME for our IMPACT).

As we near the year end, I wanted to share a great way to re-think your math. This should help with goal setting and R.O.E for the rest of this year and well into next. The Bystander Effect and Philanthropy

Malcolm Gladwell explores the Bystander Effect in The Tipping Point. He recounts the 1964 New York (Queens) stabbing death of Kitty Genovese. Reportedly, dozens of witnesses heard Ms. Genovese and her cries for help; however, no one called the police.

The story is used to paint a picture of a phenomenon called the Bystander Effect – which has been well studied since. The Bystander Effect is one in which as more people are present at a scene of distress the responsibility for action becomes proportionally diffused.
38 people heard Genovese cry for help. Each knew others heard the cries. They were loud, in the middle of a big city. Each person assumed that someone else was making a call to police. So no one called the police.

This specific story has been debated since, but the point still stands. Take CPR Training for example – You used to shout, “Someone go call 911!” Now you’re instructed to point at a person and say, “YOU – go call 911!” If we need to direct the request for a simple phone call – to save a life – it stands to reason that it would go the same way for philanthropy.

Apply this to special events. Have you been to a special event where people are crying, overwhelmed by the impact of the organization? What’s the average gift size?

Alternatively, we know that if we simply change the context and visit with our best people one-on-one and JUST ASK, the responsibility cannot become diffused. When you make a specific request, face-to-face, the action is increased ten-fold (at least).

There is a world of difference between a plea for help to a group and a specific ask to an individual (or individual corporation/foundation). ALERT: SPECIAL EVENTS ARE NOT ‘SPECIAL!’

And, they’re not ‘EVENTS!’ They rarely generate income anywhere close to the corresponding staff and volunteer effort and time. If you really think anyone in your organization wants to work for ‘EVENTS-R-US’ or do one more ‘GOLF OUTING’, ‘STAR BAZAAR’ or BINGO, you need to get out of your office (and out of your dream world!) and talk to your stakeholders!

P.S. Not only do your volunteers and staff hate these Non-Special Events, so do all of the ‘INVITEES’ … who clearly don’t want to go to another ‘un-memorable, time-away-from their-family’ auction, gala, ‘fundraiser’!!!

MAKE EVERYTHING YOU DO A MEMORABLE EXPERIENCE!

Nota Bene: If you don’t know the ‘difference’ between a ‘Special Event’ and a ‘MEMORABLE EXPERIENCE’ , think about the difference between a one-ring, carnival CIRCUS with two clowns, an elephant, some monkeys and an old lion … and CIRQUE DU SOLEIL!!! Enough said.

I learned about the TRIPLE NET concept during my days as a real estate broker and playing real-life ‘monopoly’ purchasing houses and commercial buildings.

In simple terms, the real Triple Net lease means that the tenant is responsible for all of the costs relating to the asset being leased. Usually this means that in addition to the rent, the tenant is required to pay for real estate taxes, insurance, and property maintenance.

In the For Impact world, I use this Triple-Net concept to explain the true value of any fundraising activity.

For example, everyone talks about how much money they generated at their (not) special event. “We sold ‘x’ tables/tickets, etc.” The number stated is almost always revenue.

Note: Depending on how you want to play this game, there could be one more net, which would be the opportunity cost if staff or volunteers have been working on major gifts or top prospects.

Try the Triple-Net math with your fundraising activities:

Is the Net-Net-Net really worth the effort?