Merry Christmas to our For Impact family!

I hope you are all getting some much deserved time off with loved ones. 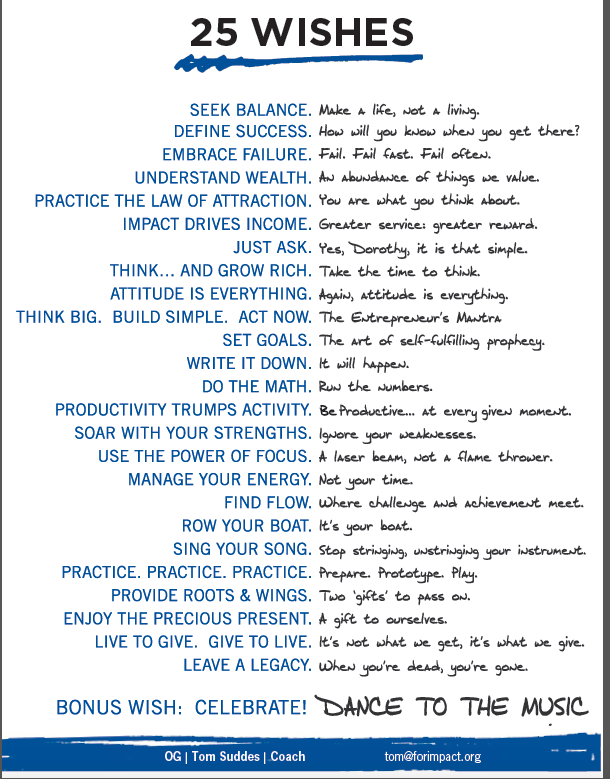 To Have or To Be

We’re defined by WHAT we HAVE or WHO we ARE.

“Deeds of giving are the very foundation of the world.”
– The Torah

Keynote Slides: Be For Impact

Last week we were with the New Jersey AFP at its annual Conference on Philanthropy. The conference theme was STORY – something we at The Suddes Group are pretty passionate about!

Here are the keynote slides.

My thanks and kudos to the NJ AFP leadership. We speak at conferences all over the world and this was one of the best programmed and organized gatherings I can remember.

The Bystander Effect and Philanthropy

Malcolm Gladwell explores the Bystander Effect in The Tipping Point. He recounts the 1964 New York (Queens) stabbing death of Kitty Genovese. Reportedly, dozens of witnesses heard Ms. Genovese and her cries for help; however, no one called the police.

The story is used to paint a picture of a phenomenon called the Bystander Effect – which has been well studied since. The Bystander Effect is one in which as more people are present at a scene of distress the responsibility for action becomes proportionally diffused.
38 people heard Genovese cry for help. Each knew others heard the cries. They were loud, in the middle of a big city. Each person assumed that someone else was making a call to police. So no one called the police.

This specific story has been debated since, but the point still stands. Take CPR Training for example – You used to shout, “Someone go call 911!” Now you’re instructed to point at a person and say, “YOU – go call 911!” If we need to direct the request for a simple phone call – to save a life – it stands to reason that it would go the same way for philanthropy.

Apply this to special events. Have you been to a special event where people are crying, overwhelmed by the impact of the organization? What’s the average gift size?

Alternatively, we know that if we simply change the context and visit with our best people one-on-one and JUST ASK, the responsibility cannot become diffused. When you make a specific request, face-to-face, the action is increased ten-fold (at least).

There is a world of difference between a plea for help to a group and a specific ask to an individual (or individual corporation/foundation).