Set Your Intent at the Start of the Visit

Set your intent at the start of a visit. In conjunction with strong predisposition, an INTENT will help you TRANSITION throughout the conversation and DRIVE toward an ask.


Stating intent could be as simple as outlining the FLOW for the visit, “Thanks for taking time to visit with us today. As George shared, we’re hoping to connect with people that really have a similar passion for helping youth. What we would like to do is take a few minutes to get to know you [the OPEN]. We would like to share a little bit about what we’re doing [the STORY]. And, then, if it’s okay, we would love to talk about ways to help [the ASK / Presenting the Opportunity].”

When they’re not able to navigate the ‘flow-of-the-visit,’ Development Officers have a hard time transitioning to the ask. It’s as though they are waiting to be invited to have a discussion about how the prospect can help.

In a broader and universal sense, any discussion is more productive when framed by a clear intent. As a reminder, here is the framework we use to illustrate the ‘The Flow of the Visit.’ 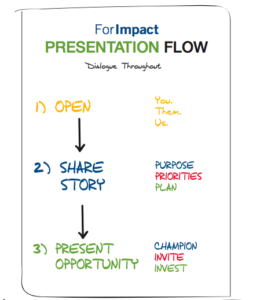 The Elevator Pitch may be one of the most powerful framing devices ever. By common definition, the Elevator Pitch means being prepared to cram as much about ourselves/our organization as we can in between floors one and three.

But, did you know that the world’s first elevator pitch involved Elisha Otis climbing on top of one of the first elevators and taking an axe to the cable, showing that the brakes would work?

When you think of it this way, it becomes much more an Elevator ENGAGEMENT than an Elevator PITCH.

If you have 60 seconds with someone on an elevator, to pitch yourself, your impact or organization, presumably the goal is to get the other person to say, “Hey, this sounds interesting. Let’s keep talking.” If that’s the goal then we should be asking ourselves, “What’s the best way to engage in a short time frame?”

You engage more in a short time frame by asking questions than you can by talking. Instead of spewing for 20-60 seconds, even if succinct, think about one great question you can ask of the other person to get them ENGAGED in a conversation.

When you’re with a prospect on a visit, by phone, leading a tour or on an elevator, are you SAYING or ENGAGING?