“Can You Get Me A Proposal?”

Have you ever finished a great visit and had the prospect say, “This is great – Can you get me a proposal?”

If someone asks this we need to simplify on the spot – “Sure thing. Are you an email person?” (Everyone is.) “Would it be okay if I summarized our conversation in bullet point form and shot that back by email?”

Save yourself HOURS by converting ‘proposals’ to ‘bullet points.’

Essentialism: The Disciplined Pursuit of Less 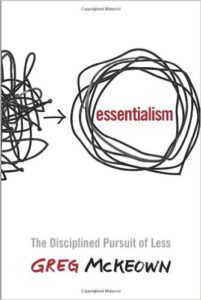 This week’s W.O.W. is a book – Essentialism: The Disciplined Pursuit of Less by Greg McKeown.

His core message: Do less, but better. You can unlock quality and make your highest contribution toward the things that really matter by doing only what is essential.

He dubs this ‘Essentialism.’

In some ways this isn’t a new idea, and yet, I found myself underlining nuggets on every page:

This makes a lot of sense. Recent discoveries in neuroscience tell us that the decision-making function in our brains does not prioritize!

Essentialism is applicable to any human endeavor:

I agree with McKeown’s notion that Essentialism is an idea whose time has come. We are in an age-of-noise. Discern. Focus. Do less. Have more IMPACT.

How to Create a Funding Rationale Tied to Impact

This week’s theme is BUILD YOUR FUNDING RATIONALE.

Essentially there are three ways to create a funding rationale – the three P’s. You can ask someone to invest in:

It would be more accurate to refer to this final rationale as a ‘unit’ but then I would lose alliteration. You can do the math to figure out the cost to impact one student, one class, one session, one exhibit, one visitor, etc. This could be a total cost or a ‘gap cost.’

Commonly used with the ‘campaign mindset.’ Cast your vision, attach a dollar amount, articulate a funding plan then ask someone to be a piece of the plan.

You can use one, two or all three – but you must HAVE a simple funding rationale:

“Could you underwrite the program this year and next?”

“Could we ask you to take the lead on this plan?”