If you’ve seen Tom or me speak… or if you’ve been to a workshop then you’ve probably heard our rant about ‘No More Special Events’.

A bold few always want to challenge this position:

No one ever says, “But that’s our CASH COW!”

The reasons most often heard in defending special events are really tied to MARKTING. Substitute the objections above with, “But that’s how we do our marketing!”

Interesting. And, OK. So that begs a question, what about your SALES?

Think about your development efforts in terms of MARKETING and SALES. Right now we don’t use those terms (Enough? At all?). Use MARKETING and SALES as a simple strategic framework. What IF we all agreed that the one big event was going to be the most incredible opportunity for us to tell our story? What if we didn’t pretend it made a ton of money?

If you decide to keep that event then decide it’s purpose. If it’s to BUILD RELATIONSHIPS then set out to make it the best at doing that… but don’t pretend it’s the centerpiece of your funding strategy.

A reminder: Best way to MAXIMIZE RELATIONSHIPS is 1:1.

And a question: What if we took that time, energy and effort spent on the event(s) and put that into getting great visits and providing customized experiences with our top 10 or 20 prospects?

How to: Planned Giving

Some people go to school for years to understand those D-ring binders – they’re called accountants and lawyers!

Your job is to get the person/prospect/family to agree they want to leave a legacy – then have the people that went to school for this stuff figure out the mechanics. Stay high level. Stay simple.

Personally, I’ve never done anything with a CRT or creative insurance policy. I know that some gifts have ended up using those vehicles – the ‘how’ was just completed by someone more qualified than me.

I noted to someone the other day that I pretty much only use two ways to close a planned gift.

Asking someone that gives a regular and recurring amount to ‘protect the investment’. Example: Let’s say someone is giving $10K annually. You could rationalize a $200K planned gift to ‘protect’ that annual commitment. Idea is that if you had $200K and you wanted to use that as an endowed gift it would generate about 5% every year — or $10K.

The coaching: Spend time getting people to WANT to fund your impact… COMMITTED to funding your impact… this is what YOU do well. Then, team up with others that do their job well to figure out the HOW-TO.

“Lining Up the Financing”

Nick and I just had a shorthand, fast and furious, conversation on how to present projects (buildings or otherwise) that don’t have all of the details complete. This could mean final cost estimates, but it could also be around no final design, no final square footage, no architect… and perhaps even no site!

Here’s Nick’s great line for leadership investors: “We are working on (all of the above), and will have (final numbers or whatever) at some point.”

“Today, we’re LINING UP THE FINANCING… to ensure that we can make this project happen.”

After that, it’s all downhill, so to speak. They’re either IN or not. They either GET IT, at the HIGHEST LEVEL, or not.

We have raised an awful lot of money and gotten some serious leadership commitments with no final cost, no final design, and on a number of occasions, no final site or land!

A Thought on Major Gifts Officers

A thought/question as it relates to ADDING more sales people (major gifts positions). Should you add another position? Or, should we re-design some of the top-level priorities so that an ED and senior advancement officer can allocate more time to the top of the pyramid?

Catalyst: I’m out west working with a For Impact org that is about three months into making the quantum leap. ED gets it…. totally. He says, “Nick, I can see how this is going to continue to be HUGE. I’m thinking we should add ANOTHER major gifts person.”

I challenged the ED (and share with you). To date, he’s only been able to spend about 1% of his time on top-level relationships (up from 0%). My suggestion was that he hire a high-level support person (eg. ‘Director of Special Projects’) to free up his ability to create a 10% focus. Even if he were to hire another sales person, he is a leader, a visionary and consequently, the dude that needs to be part of the presentation for the many $1M+ relationships. Adding someone else (without adding leadership focus) isn’t going to max the return. Interesting though, I’ll bet it would still have a strong ROI.

This is no different than asking a CEO to make it a priority to service the top-level accounts for a company. He/she can add more sales people but to really maximize the potential time could be well spent checking in on the top 10 accounts.

One of the discovery questions for boot camp attendees: How many times have you (or org) sat down with someone one-on-one in the past three months and asked for more than $1,000?

For MOST organizations and even the BUSIEST funding professionals and largest colleges this number rarely tops five!

One simple way to think about boosting productivity is to literally drop everything that doesn’t help you boost this number (by a lot.) What if your ONLY goal were to have ten great visits in which you shared the story of your organization and presented the opportunity to help or make an impact (this month)?

I think the Standford Social Innovation review is improving – markedly. When it first launched I thought the brand and concepts were strong but articles were way too academic/theoretical — as a ‘field guy’ I didn’t relate much. I’m starting to come back in to the fold. Thought this was a really cool article on Ten Nonprofit Funding Models – thumbs up to the framing these authors put around various funding models.

Read through the article, you will see that these are (for the most part) really about how the fund development operation builds its case-for-support and funding base. For example, a University is a Beneficiary Builder. They offer services and provide enough value that people who have benefited in the past (alumni) will fund the model. We’re seeing huge success in this model and a marketplace that is something of an arms race (as every college competes to build the latest and greatest)… you’re seeing the funding model shift from student workers to alumni philanthropy… hence some of the ivy’s starting to announce that students will graduate debt free.

Thanks to Sean Stannard-Stockton | Tactical Philanthropy for finding this article.

If an investor is giving you 1x in response to a mail campaign, any sort of an event or ‘totally unsolicited’ then he or she would likely give 10x in response to a one-on-one (personal) visit-with-an-ask and 30x if the visit includes a dialogue around the funding plan (as part of the full case-for-support and ask).

At our seminars I share a story of a school that met with parents and supporters. They asked everyone to “prayerfully consider giving at a level that was significant”. Those that had previously contributed $2000 through the auction responded with $20,000 gifts. The school was still frustrated. They had $1M prospects giving $100K and $100K prospects giving $20K.

As much as the prospects liked the school they had no context for how much money to consider. They had no way of guessing that $1M might be the linchpin for the campaign… there was no discussion that gave the committed families and supporters a framework to think bigger.

This school went back to each supporter with a complete funding plan. For a $1Million dollar ask, for example, they would ask for the $1Million (a specific number). More than that they would have a discussion around WHY the $1Million and what it would enable the school to do (leverage, leadership, timing, etc). The prospects had a broad context in which to consider the ask and many of them increased their gifts by five times and some by 20 or 30 times!

A rhetorical question: Is it easier for you to visit with every current funder and ASK (10X) or to get ten more prospects to give? From there, is it easier to get your best prospects to 30X or to get 5-10 more visits? 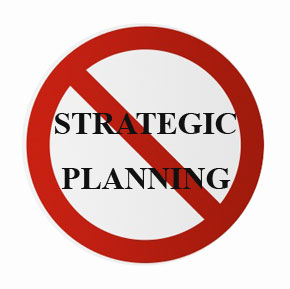 Most ‘Strategic Plans’ are INTERNAL… where we are literally talking to ourselves! They are a work of fiction usually prepared by left-brain, accountant types who love outlines, charts, 5-year projections, etc.

If you’re looking for an undecipherable, unimaginative, unread, super thick binder to use as a bookend or a doorstop… then, by all means, do a ‘STRATEGIC PLAN’!

“EVERYBODY HAS A ‘PLAN’ UNTIL FIRST CONTACT WITH THE ENEMY.”
—Sun Tzu

“EVERYBODY HAS A PLAN UNTIL THEY GET HIT.”
—Leon Spinks

P.S. I feel the same way about ‘Business Plans’, but I’ll save that rant for
another day.

START WITH A 1,000-DAY ACTION PLAN.
There is too much to do… too many lives to save and impact…
to get caught up in ‘strategery’.

If you really, really want to achieve your Vision, fulfill your Mission, live
your Message… then prepare an ACTION PLAN that will provide focus and
direction for the next 1,000 Days (11 Quarters, 33 Months, almost 3 Years).

P.S. Match this with a 1,000-Day FUNDING PLAN and you will be on your
way to success.

I’ve never worked for the State Department but I know someone who has. Last week I was on the road and spent an afternoon with a campaign champion in California. He introduced a piece of State Department lexicon: ‘The Action Forcing Event’.

The organization I’m working with has a number of pending commitments. We’re using the executive director’s scheduled retirement (March 2008) as a reason for investors to finalize their commitments. This reason, he explained to me, is called an Action Forcing Event (AFE).

He went on to explain that in the government you sometimes have to make up an AFE just to get stuff done.

We can all be using AFE’s as part of our case/rationale for support around WHY we need the commitment NOW. Applied, this could be:

Without an AFE you are at the ‘complete’ mercy of the prospect’s timeline. Without an AFE the pending process can (and often does) drag on indefinitely.

I would encourage you to create an Action Forcing Event as part of your strategy for every visit. It’s not often that a visit results in a check on-the-spot so think about ‘timing’ as part of your presentation.

Jim Yoder is one of my closest friends (since our days together at Notre Dame) and a former partner of The Suddes Group. Jim has been running/managing large campaigns for over 20 years. He is currently working on a $1.5M Campaign for Economic Development (over 5 years) in a small community in North Carolina.

He has spent 3 DAYS…

FOR THE LAST 3 MONTHS

working on this Funding Initiative.

Oh, and by the way, Jim has never met any of those prospects/potential investors personally before he made that visit… AND he Presented the Opportunity for them to make an investment (JUST ASK) in almost every single instance!

I told Jim that 100 visits in those 18 days was more than most Development Officers and Major Gift Officers Make in a year.

HOW MANY VISITS ARE YOU/YOUR ORG MAKING THIS WEEK???