I did a pretty decent Presentation to a very, very experienced development group on Saturday in Tampa, Florida. The NACCDO is an organization of marketing and development officers of the top CANCER CENTERS in the United States. This conference was hosted by Moffitt Cancer Center, a truly World Class Organization.

My topic was ACCELERATING THE ASK. After the introduction (and tripping and falling), I had about 60 minutes. I prepared for three weeks, plus the entire plane ride to Tampa, plus until midnight the night before and at 5:00 a.m. the next morning.

It’s kind of hard to take 50+ years of selling (I remember first ‘sale’ at 10 years old), 37 years of development work, our two-day boot camp/training camp/sales training into 60 minutes. But, I tried anyway.

One of the pretty cool things that came out of this session, at least for me, was getting all of our FRAMEWORKS and DEVICES on the front/back of an 8½ x 11 sheet of paper.

Here is the pdf. You can even blow it up as a POSTER (which I did for the group on Saturday).

It is, literally, pretty much everything I know about THE ASK. I hope it helps.

Philanthropy is Greek for ‘friend of mankind’, and nobody are bigger friends of mankind than Bill and Melinda.

Jeff Raikes was named CEO of the Gates Foundation within the last year. There is a terrific article/interview in Stanford Social Innovation Review that you need to read if you’re in the Third Sector… and have any interest in fundraising, development, philanthropy and philanthropists, and funding your vision.

Special Note: Talks about how much he really likes his “Impact Planning and Improvement Group”. It’s all about the IMPACT!

Wanted to share this illustration of a customized sales process Kerry and I did with a client. If you’ve been to a workshop you will recognize Predisposition > PTO (Present the Opportunity) > Follow-up from the Roadmap: Sales Process.

Though we made it for one client, I think it’s pretty near universal. I posted a first iteration of QLF in July. Have updated below…

Have a look below at our Quantum Leap Framework. We use this as a FRAMEWORK for conversation, services, training, solutions and more (just about everything, really, that involves taking some sort of a QUANTUM LEAP with your FOR IMPACT organization.)

Hopefully you will find this transcends funding issues and offers a framework for organizational IMPACT and INCOME. Moreover, this is applicable to any organization/business/movement looking to Take a Quantum Leap.,

FRAMEWORK: A framework can be adapted to situations and organizations. It’s not a one-size fits all process. It provides a pathway for thinking through a challenge or complex issues including but not limited to:

I think the applications are limitless.

Here are some example applications:

On Campaigns: A campaign is a strategic component of the framework. (The campaign ‘process’ is determined by the VISION/PEOPLE.)

Strategic Planning: Most strategic plans talk about the how-to without ever going up to the ‘vision level’ to get consensus about the ‘where to’ or ‘why’ which is needed for SIMPLICITY.

People/Process/Performance: A little bit of Jim Collins’ notion – get the right people on the bus first – then you can drive the bus anywhere (perhaps with a clear process and ways to measure performance).

Board Meetings: Use this framework to differentiate between Vision/Strategy/Execution. (Hint – stay at Visionary level with time to dip down / frame strategy.)

Decision-Making: Action/Execution starts by ‘drawing the line in the sand’

For me, this FRAMEWORK captures components of BIG CHANGE… BIG LEAPS!

I first assembled these thoughts as an intro to the For Impact Campaign Manifesto. Re-listed here and in a PDF for download, these QUANTUM LEAP ideas are powerful. I hope they push eliminate the bountries of traditional campaign thinking.

QUANTUM PHYSICS is described as the

“most powerful science ever conceived by human beings.”

A QUANTUM LEAP is the

“explosive jump that a particle of matter undergoes in moving from one place to another.”

QUANTUM LEAPS are about

‘exponential jumps’ in your impact and your income.
(NOT about kaizen, tweaking, OR 3% to 5% growth tied to the adjusted cost of living or tuition increases!)

You don’t focus on the ‘middle’ of the jump…
but where you want to land!!!

QUANTUM LEAPS are NOT about ‘trying harder!’

Trying harder produces only INCREMENTAL GAINS not QUANTUM LEAPS.
(Physicists studying Quantum Mechanics note that particles make these ‘jumps’ without apparent effort and without covering all the bases between the starting and ending point!)

Price Pritchett says, “Be ruthless about trying something different. Conventional growth comes because we think along conventional lines.”

QUANTUM LEAP means violating the BOUNDARY of the ‘PROBLEM.’

This means giving yourself permission to dream and to risk.

QUANTUM LEAPS come when you seek the elegant solutions.

Look for an approach characterized by SIMPLICITY, PRECISION and NEATNESS.
(NOT as COMPLEX or TIME-CONSUMING as your PRESENT STRUGGLE).

QUANTUM LEAPS allow you to do MORE with LESS!

QUANTUM LEAPS are NOT about the ‘how to’.

Skip the ‘detail’. The answers will come to you. When they do, you’ll probably find them to be simple, streamlined solutions.

QUANTUM LEAPS are tied to BHAGs.

A QUANTUM LEAP by definition, means

moving into unchartered territory with NO GUIDE to follow.
You personally draw the map as you go. (In this case, however, I’d like to offer a GUIDE. You can still draw.)

QUANTUM LEAPS require you to take the OFFENSIVE.

You can’t achieve exponential gains from a defensive posture, a passive stance.

FAILURE is a sign of PROGRESS! It means you’ve left the safety of the status quo. Failure is a resource. It helps you find the edge of your capacities. (If you send a rocket toward the moon, 90% of the time it’s OFF COURSE; it ‘fails’ its way to the moon by continually making mistakes and correcting them. Therefore, fail fast.)

QUANTUM LEAPS regard ‘ZERO DEFECTS‘ as a HOSTILE CONCEPT.

‘GETTING READY’ (research, fancy brochures, etc.) is a stalling tactic, an act of anxiety.

Finally,
You don’t ‘prepare’ for a QUANTUM LEAP…
You MAKE IT, and then you frame out
the DETAILS and STRATEGY on the way!

“FAIL. FAIL AGAIN. FAIL BETTER.” —Samuel Beckett
“FAIL. FAIL FAST. FAIL FASTER.” —Tom Suddes
“SUCCESS is going from FAILURE to FAILURE with no loss of ENTHUSIASM.” —Winston Churchill
“We need to FAIL in order to SUCCEED. Our only decision is HOW TO FAIL.
By not going far enough… or going too far. I prefer the latter.” – Harriet Rubin

Simple Progression at a Board Retreat

I spent the morning yesterday facilitating a Board Retreat for an incredibly impactful organization.

I wanted to share with you 3 big takeaways, as well as the ‘SIMPLE’ PROGRESSION of how they can raise significantly more money (INCOME) to affect their IMPACT.

He made this point as we were refining the MESSAGE and reinforcing the PURPOSE and the REASON for their existence. In other words, the WHY model.

We then did a simple, powerful Pyramid/Funding Plan to determine that the $17M would come from 29 investors.

If you’d like to see it, I’ve included the SIMPLE PROGRESSION (pictured above, download here) that we used as a framework to generate more money. It corresponds with our also very simple ROADMAP. 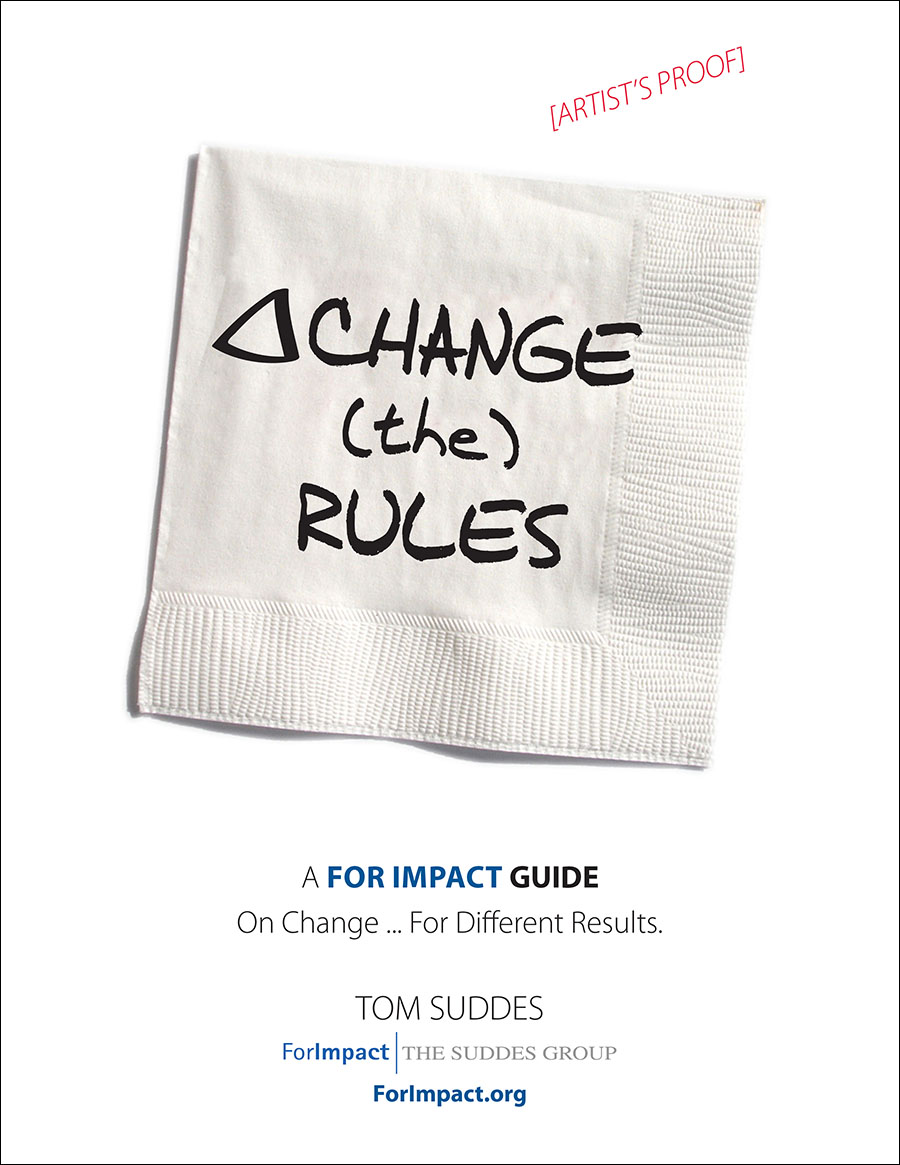 Yesterday, Tom was in Colorado Springs speaking to the AFP with Robbert Egger about Change. Today, I’m at AFP in NW Ohio talking about more of the same. However, I think Tom had more gumption. He put together an entire e-book on change 🙂

Change (the) Rules (DRAFT) includes all the ‘no-mores’, quotes on change and lots more vocabulary. Tom and I have both been framing our discussions around this quote from Tim Kight:

“Every Organization is Perfectly Designed to Get the Results that it’s Getting.”

Our message, this book and just about everything else we’re doing is about CHANGE, specifically the CHANGE we make to get different results…. Change RULES! 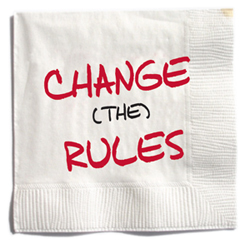 This play on words comes from my good friend Dick Celeste, President of Colorado College. Former Rhodes Scholar. Former Governor of Ohio. Former Ambassador to India. And currently, terrific father and grandfather. Dick gets this whole thing around CHANGE.

In this generation’s lexicon, ‘RULE’ is a good thing. So, yes, CHANGE does ‘RULE’.

At the same time, in order to really CHANGE something (yourself, your organization, the world), you also have to CHANGE (THE) RULES.

Paul Arden, in his wonderful little book It’s Now How Good You Are, It’s How Good You Want To Be, speaks for a multitude of entrepreneurs and change agents when he says,

“You can’t solve the problem if you’re playing by the RULES.”

I believe it’s much stronger than that.

THERE ARE NO RULES!

Obviously, without violating any moral or ethical principles, when it comes to trying to solve important social problems, health problems, education problems, financial problems… THERE ARE NO RULES.

August 11th to 15th is For Impact’s CAMPAIGN WEEK
(our version of ‘Shark Week’ on the Discovery Channel).

To kick it off and get you in the right frame of mind, I’ve summarized
33 LESSONS I have learned in helping manage over 300 ‘Campaigns’
and raising over $1B.

Some are self-explanatory. Others are ‘Suddes Shorthand’. (You can download
the entire CAMPAIGN MANIFESTO, TAKE A QUANTUM LEAP for free between now and Aug 15.)

Every org we talk with is IN a Campaign, just coming OUT of a Campaign,
or PLANNING a Campaign.

I hope one of these lessons is the breakthrough for a QUANTUM LEAP ?

Get 33 Campaign Lessons on one (really cool) page